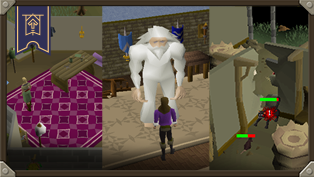 We’re making moves this week with D&I changes, Halloween buffs, and two new quests for you to speedrun!

If you’re an avid FashionScaper, enjoy romancing royals, or love a good quest, we’ve got a few changes this week guaranteed to make you happy!

First up, changing anything about your base character model is now completely free, with no limitations! This means we’ve got freebies afoot (little shoe joke for you there) at Yrsa’s Shoe Shop in Rellekka, Thessalia’s Shop in Varrock, the Hairdresser’s in Falador and the Makeover Mage!

Now that you’ve got those fancy new duds, why not walk them over to Miscellania, where the dating scene has recently been revived? The following changes have been made to the Throne of Miscellania and Royal Trouble quests:

Speaking of quests, the gender requirement during Recruitment Drive has been removed and replaced with a new puzzle which will test your powers of observation. In addition, you’ll receive a cool 3,000 GP for completing the quest.

You’ll also notice that anyone can now join any Consortium company – excepting The Red Axe – regardless of which gender they present as. Any references to the companies’ previous gender discrimination have been removed from the quest.

Following completion of The Feud, all NPCs in the town of Pollnivneach will revert to their usual names, instead of going by Ali. You can learn more by speaking to the citizens during and after the quest!

If you’ve got the itch for something more mischievous, both male and female H.A.M. members can now be pickpocketed at level 15 Thieving, granting 22.2 XP per successful pickpocket. The Skill Guide and level up messages have been updated accordingly.

To coincide with the above change, Barbarian Village inhabitants of any gender can now drop Clue Keys – hurrah!

King Roald has finally heard the long-lasting complaints from The Varrock guards and has now supplied them with armour just like their counterparts in other cities. We’re sure this will stop them being murdered en masse for Clue Scrolls.

We’re still working on more Diversity and Inclusion changes, but we’re not quite ready to talk about them just yet. Keep your ears to the ground on that one!

This also means that you’ll now be able to rack up the points required to purchase formerly-unobtainable Tier 3 Speedrunning outfit!

The Tier 3 Speedrunning outfit and the Graceful version.

We’re also launching Betas for two further quests, A Taste of Hope and Sins of The Father, so you can give us your feedback before they launch in December!

You won’t need to jump into any beta worlds this time – you’ll be able to test them from any regular Quest Speedrunning world! Remember, though, that these beta quests won’t give you trophies or set best times.

For those of you that want to know more about the testing, here are the requirements we’ve currently set:

We’ve also made the following changes to Speedrunning worlds:

We’re also aware of an issue where items that drop because the Inventory overflows (for example, when you’re given an item but already have a full Inventory) are not correctly deleted when starting or ending a speedrun.

We expect to have a global fix for this issue released later this month. In the meantime, we will manually fix particularly bad instances of this problem. Where needed, best times will be reset to ensure times don’t become unobtainable.

Also, as an added extra, Quest Speedrunning trophies have been made lighter… without using cheaper metals!

As always, we’d love to hear what you think of the requirements, starting items and any other feedback you may have.

Finally, as a quick heads up, we’ll have a new competition for all you fast-footed folk starting on November 16th, so get practicing your time-saving techniques in Prince Ali Rescue & Beneath Cursed Sands!

We’d like to give a big shoutout to the speedrunning community for all their help! If you’re looking for more information about where to start or just regular, friendly advice, check out the places below:

Speaking of quests, we’ve made a couple of quality-of-life changes to Ratcatchers:

Tombs of Amascut
As we discussed last week, we’ve made some adjustments to Osmumten’s Fang. If you missed it, the big change is that the weapon now rolls your accuracy twice, but doesn’t re-roll an enemy’s Defence.

For a full rundown, including the raid’s drop mechanics, click here.

This behaviour will be reflected everywhere except the Tombs of Amascut, where the Fang will act as it did before the change.

We’re glad you’re all enjoying the Halloween goodness! Because you’ve been so ghoulishly delightful, we’re buffing the event so you’ll enjoy it even more!

Firstly, you’ll get more treats per drop, a higher chance to get treats in the first place, and a reduced cooldown on treats when gathering logs, ore or fish.

Generous treaters are now more common and hang around for longer – we’ve also reduced their spawn delays, so they’ll appear faster, too!

Lastly, we’ve noticed you guessing the size of the global ghouls – sorry, goals – as anywhere between 500 million to 1 billion. As a heads-up, it’s not even as much as the smallest of guesses… and may even be off by a couple 100 million!

Crack The Clue 3
It’s been over a month since Crack The Clue 3 began and we’ve throughly enjoyed watching all of you intrepid treasure hunters solve the clues created by the fantastic Woox!

If you’re wanting to start, fear not it’s not too late as there are plenty of great places to find those like-minded hunters:

PvP Rota Changes
The PvP rota has moved to Period A:

World 390 (AUS) for LMS Competitive has been deactivated with this rota.

The PvP Arena is using ‘Max/Med‘ loadouts in Ranked Duels and Tournaments this week.

You can also discuss this update on our official forums, on the 2007Scape subreddit, the Steam forums, or the community-led OSRS Discord in the #gameupdate channel. For more info on the above content, check out the official Old School Wiki.