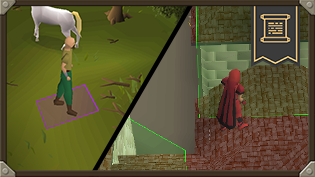 New iOS Client Closed Beta
Following the success of our New Android Client Open Beta earlier in the year, many iOS players have been eager to test out new client features on iOS devices. We’re delighted to announce that your time has come!

New and exciting client features will be coming to iOS in the form of a Closed Beta. New features include:

We’ve received really positive feedback from our Beta testers so far, and we’re keen to see what you think. Within the coming weeks, we’d like to invite you to test out these awesome new features for yourselves!

In order to participate in the New iOS Client Closed Beta, you’ll need to ensure that your device is running iOS 13.0 or above. You’ll also need to fill out the iOS Beta Form with the following details:

Successful applicants will be contacted through their account mailbox and should also receive e-mail confirmation from the Apple Store when the Beta is live. Please be aware of potential mobile phishing scams. If you’re unsure about any communication you’ve received, check your account mailbox to verify the legitimacy of any suspicious emails.

We expect that the New iOS Client Closed Beta can go live in around two weeks or so. However, we can’t give you a set date just yet as we need a few days to carry out some internal testing first.

Provided this goes well, more information can be shared after the April bank holiday (around April 19th). There’s a chance that the Beta date may move a little, but we’ll keep you informed.

Once the Beta is live, any further comms will appear on the official Old School RuneScape Discord in exclusive channels (#iOSBetaAnnouncements, #iOSBetaBugs, #iOSBetaFeedback & #iOSBetaGeneral).

So what are you waiting for? Register your interest today!